Amitabha Hospice Service offers free practical home help and compassionate companionship for the elderly and the incurably ill of any age and their families with specially trained and supervised caregivers throughout the greater Auckland area. Based on the Buddhist principles of love, integrity, equanimity and service, each family member and staff member is accorded equal respect and compassion with regard to their individuality and uniqueness as members of the larger universal human family. Amitabha Hospice Service is dedicated to developing and maintaining the highest quality of compassionate care in co-operation with other professional community services. 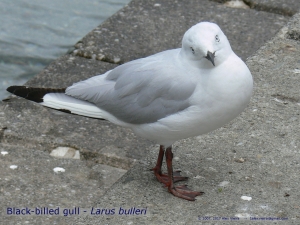 ed gull – the Black-billed gull is the less common that I observed since 2004. This bird is endemic to New Zealand, which means it occurs only in New Zealand and its scientific

This picture was shot in January 2007 in Queenstown, about lunch time in the popular town center at the “CBD” beach of the Wakatipu Lake. There at this summer time is plenty of locals and tourists lunching and the gulls come among the people, looking for the crumbles. They are quite tame there so they fly low and pick up the hand offered meals. Of course if you stay in the same place too long you risk being “condecorated” with a warm splash of bird residue. This particular bird was keen to be portrayed and performed such a lovely pose looking straight to the camera.  I was lucky to be in the right place at the right time with the right bird!

If observed at distance the Black-billed gull can be confused with the Red-billed gull as these two species have similar sizes and plumage colours. However, in the adult birds, the first shown bill and  foot in black , and the second presents bill and foot in pale red colours.

This bird frequent mostly the mainland and it prefers riverbeds and lake shores to breed in South Island where I watched on summer flocks of dozens of birds flying few meters above the water in search of aquatic flying insects to catch. They touch down during only few minutes and again the flock take off and performing aerial maneuvers chasing insects.

The Black-billed gull in the winter meets the Red-billed ones on the sea coast and enjoy eating plenty of small fish and molluscs.

Kea is the Maori name for the New Zealand Mountain Parrot which scientific name is Nestor notabilis and it is one of the cleverest birds I have seen here in NZ. Today this  parrot  apparently is not found in North Island – where was in the past as some Kea bones was found in 1960’s in Waitomo area – and it is seeing around South Island , specially – like its common name presents – in the mountains  environments. Kea is a frequent visitor to ski fields where it enjoys the tourist’s food left overs, the fat ones like yogurt, butter, cheese and so being the favorites. I saw Keas walking quite comfortably between people at lunch time at the Remarkable Mountains Ski field near Queenstown.

Kea is a restless bird full of curiosity always interested in investigating parked cars rubber seals, boot laces, and anything that could be “probed” with its beak. When accepting hand feeding, sometimes the Kea gently probes the finger conveying the food, in a quite delicate manner.

These two pictures – “100_0092 kea x” and “P1020429 kea x” was taken on March 2006 at the Fox Glacier Walk carpark. There my companion Eliana got her finger politely probed (no harm done) and while I was setting up the camera another Kea probed the tripod rubber feet’s.

The Monarch butterfly is not one of the natives of New Zealand but it certainly is the one that our people is most used to see on summer seasons. Its original place in North America is quite far from New Zealand and some scientists believe this handsome butterfly made its way to here through the Pacific Ocean islands along the middle of 19th century or maybe earlier. Monarch does not favour cold climates and from Wellington to South they need some years to rebuild its population after a strongly cold winter season. Thus the Monarch could be one of the luck beneficiaries of the current increasing hot weather, being climate changes a struggle for some beings but handy for others.

The plants that Monarch depends for its food, specifically swan plant or milkwood, does not happens in New Zealand nature, however some people plant it in gardens which is very welcomed by the Monarch.  In its butterfly stage, I saw Monarch feasting on flower nectar (picture DSCN8454), which could mean the Monarch possibly contributes as a pollinator.

One behavior I went unable to register (it appears we always are without the camera when special things happens around…) but I observed quite close, was a mating a bit choking: In January 2017, during a walk on Twin Streams Park in Sunnyvale, West Auckland, NZ, I saw an well developed Monarch (which I though was a male…) flying around apparently without specific purpose until the second Monarch show up graciously flying nearby and attracting the “male” attention. Like immediately felt (or “felled” ?) in love, the male started try approach sometimes, always ignored by “her” who carry on not interested and keep going from one plant to another while the “male” keep following close until his passion passed his reason and suddenly  he used his legs to get her and grab her to the ground. She made two or three attempts to fly away but he hold fast while maneuvering his body until their ends connected and she stopped trying get away. Only few seconds making a further adjustments and the male fly again, carrying “towed” by the end the female apparently dismayed, and I hope they went happy forever…

View all posts by Anjalee